BHUBANESWAR:   Politics over shifting of the proposed wagon repair factory from Narla in Kalahandi district to Visakhapatnam in Andhra Pradesh intensified with the Congress calling Kalahandi bandh on April 6 against the decision.
Criticising the Centre and the State Government for shifting the factory outside Odisha, president of Odisha Pradesh Congress Committee (OPCC) Prasad Harichandan alleged that both the Governments are not serious on development of railway infrastructure in Odisha.
Harichandan also criticised the State Government for not raising its voice over the issue.
BJD spokesperson Dibyashankar Mishra said his party is planning a protest in Kalahandi district against the Centre for shifting of the proposed factory. BJD held a preparatory meeting in this regard on Thursday. The mode of protest and date for it will be finalised soon, he added.
Stating that Kalahandi does not have any major industry, Mishra said the wagon repair factory at Narla would have created employment opportunities for people of the district besides bringing in all round development.
The BJP, however, blamed the State Government for the decision to shift the proposed factory to Andhra Pradesh. When the decision was announced, Chief Minister Naveen Patnaik wanted the factory to be shifted to his constituency, a senior BJP leader said.
Members cutting across partylines decided in the Assembly on Tuesday to submit a memorandum to Railway Minister Suresh Prabhu in this regard.
The decision was arrived at after a two-hour discussion in the Assembly on the issue.
The House witnessed noisy scenes over the issue for two days during which no business could be transacted.
Posted by Digambara Patra at 2:38 PM No comments: 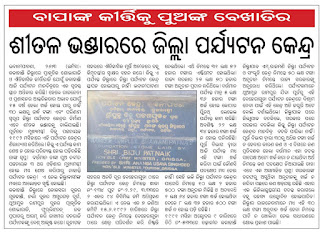 Posted by Digambara Patra at 2:36 PM No comments: 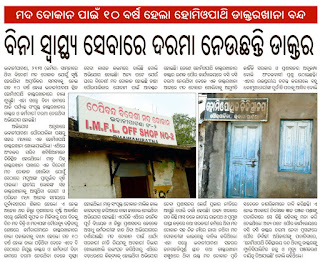 Posted by Digambara Patra at 2:34 PM No comments:

Note: There is some truth in union minister Mr. Oram's claim.

Union Minister of Tribal Affairs, Jual Oram, on Thursday blamed the state BJD government for the shifting of the railway wagon repair from Kalahandi district to Vishakapatnam alleging that chief minister Naveen Patnaik delayed the project as he wanted it to be established in his home district Ganjam.
The railways has shifted the proposed wagon repair factory, announced by the previous UPA government, from Kalahandi district to Vishakapatnam on grounds of feasibility and operational problems.
The railway sources stated that water availability was a problem at the proposed site in Kalahandi district and the empty wagons would have to travel a long distance to the site causing traffic related issues.
The ruling BJD had cried foul and charged that it was yet another instance of ‘central neglect’ while the Congress had accused both the Centre and the state for the failure to establish the project in Kalahandi.
The BJD government delayed in providing land and it did not take interest in the project, charged the Congress.
Leader of Opposition, Narasingha Mishra said all the 20 MPs in the Lok Sabha had remained silent when the railway budget was discussed.
They did not raise this issue at all, he charged. The Congress stalled proceedings of the Assembly for two days , before the government moved a motion which was adopted stating that a memorandum will be submitted to the railway minister in this regard.
The state Congress has also decided to organize a Kalahandi bandh on 6 April while the BJD plans to hold protest meetings, though it has not finalized the date.
Congress leaders charged that the BJD cannot raise any issue against the BJP because of the sword of the CBI hanging on several ruling party leaders in the chit fund scam.
The two parties have entered into an understanding of protecting each other, alleged the Congress.
On Thursday Oram reacted to the accusations saying by raising the wagon factory demand for Ganjam district, the CM had neglected the wagon repair project in Kalahandi district.
The CM and the state government did not take interest to expedite land and water related requirements for the Kalahandi project and this led to shifting of the proposed factory to Vizag, he said.
Posted by Digambara Patra at 3:57 PM No comments:

BHUBANESWAR: The two-day deadlock in the Assembly over shifting of the wagon repair factory from Narla in Kalahandi district ended on Tuesday with members resolving to lodge a protest with the Railway Ministry and demand reconsideration of the decision.
The decision was announced by Speaker Niranjan Pujari after a special debate over the issue.
Members cutting across party lines agreed that the House Committee on Railways will meet Railway Minister Suresh Prabhu and submit a memorandum requesting him not to shift the factory to Visakhapatnam in Andhra Pradesh.
Noisy scenes were witnessed in the House during the last two days over the issue with Opposition members demanding a discussion on it.
No business could be transacted in the House since Monday till the special discussion was held this afternoon.
Senior BJP leader KV Singhdeo wondered how the ruling BJD could not know about the Railway Ministry’s decision of shifting the project to Andhra Pradesh when one of its MPs is a member of the Railway Standing Committee.Participating in the debate, Leader of the Opposition Narasingh Mishra criticised the State Government for not being able to know the decision to shift the proposed project. “I smell politics for ignoring the project which was to be set up in Kalahandi,” Mishra said and added that he would suggest a visit of the Assembly Committee to meet the Railway Minister in Delhi.

This apart, there was no allocation in the Pink Book for the project which was announced in 2013-14, he said. His party colleague Rabi Naik, however, alleged that the project was shifted due to non-cooperation of the State Government.
Replying to the debate, Minister of State for Commerce and Transport Ramesh Majhi said the Railway Ministry had announced a new new rail wagon repair factory in Visakhapatnam in 2015-16 budget without consulting Odisha Government.
The Minister said the State Government had provided all logistic support including land and water for the proposed project. However, the ministry did not make any allocation for the project,” he said.
The Speaker said steps would be taken to prepare a memorandum to be submitted to the Railway Minister keeping in view the opinion of House members.
Earlier in the morning, the House witnessed uproarious scenes over the issue which led the Speaker to adjourn proceedings thrice before allowing a special debate during the post-lunch session.

Posted by Digambara Patra at 12:26 PM No comments:

KDF pitches for mining as core of development in Kalahandi

Kalahandi : With Government of Odisha making a fresh bid to access the Niyamgiri bauxite, pro-development voices from the region have extended their unanimous support to this fresh move by the state Government and have lend their voice in support of mining in the district as the core for the much needed industrialisation of the district.  Spearheaded by Kalahandi Development Forum, the lead forum in support for development in the region representatives from many walks of life mainly intellectuals, youths and from the tribal community today organized a training session on ‘Effect of Mining, Industry and Agriculture on Environment’ at Bhawanipatna to discuss with prominent citizens of the region the prospects of development which mining and industry can bring into the regionand how it is going to address the dying down syndrome of development in the region which still remains a remotely backward district in the country.  Invited on the occasion, Dr. RC Mohanty, renowned geologist and Mining specialist and former executive director NALCO said that India is marching towards growth of Industrialisation. Being a mineral and natural resource rich state, Odisha is also required to come forward to sustain its dying down industries and provide requisite support to start new industries in the region. In case of Kalahandi, though it has been termed as one of the poorest district in the country, it has ample scope for development. It has a huge mineral and natural base, especially bauxite which is essentially to be mined for the much needed boost to the industrial sector particularly aluminium. He stressed thatBauxite mining never degrade the existing natural resources, rather through implementation of advanced technologies it can conserved the natural resources in a much better way. Government, NGOs and civil society must come forward together and utilise its natural resource constructively so that the area becomes developed in further periods.  Chief Guest of the programme and renowned educationalist AK Nanda also stressed the importance of the industrialisation in the district. He said that agricultural industries, mining and heavy metal industries in Kalahandi district should be given full support to work for the development of the region.  More than 70 youths, NGO members, intellectuals and members from tribal community of the district participated in the interactive session and resolved to strengthen the voice in favour of development in the days to come. They also expressed concern on the plight of industries like Vedanta refinery atLanjigarhand also resolved to garner public support in support of sustaining such industries through all possible needs.  Present on the occasion were Bharat BhusanDeo, Satya Pattnaik, Niranjan Acharya, Durga Acharya, Abdul Kadir, Nayan Das, Paramanandamajhi, Saroj dash and Aseswar Bag among others where as Dr. Ajaya Mishra coordinated the whole program. -
See more at: http://www.orissadiary.com/ShowBussinessNews.asp?id=65837#sthash.mgk6bSke.dpuf
Posted by Digambara Patra at 12:14 PM No comments:

BHUBANESWAR: The State Assembly on Monday witnessed noisy scenes over the decision of Railway Ministry to shift the proposed wagon repair factory from Narla in Kalahandi district to Visakhapatnam in Andhra Pradesh with Congress and BJD members strongly opposing the move.
While the Congress members rushed to the well of the House demanding a discussion on the issue forcing Speaker Niranjan Pujari to adjourn the Assembly till 3 pm, BJD members alleged that the decision is yet another instance of Central neglect towards Odisha.
Congress and BJP members staged a walk out from the House when it reassembled at 3 pm demanding a discussion on the issue.
Earlier, during zero hour, Amar Prasad Satpathy (BJD) criticised the Railway Ministry for taking the plea of water scarcity to shift the proposed wagon factory to Andhra Pradesh. Describing it as a conspiracy against interest of Odisha, Satpathy demanded a reconsideration of the decision. His party colleague Dibyashankar Mishra said a resolution should be passed in the House condemning such a decision.
Leader of Opposition Narsingh Mishra also criticised the decision to shift the wagon factory from Narla to another State. He, however, blamed Odisha MPs and alleged that the Lok Sabha members were not vigilant enough and failed to mount pressure on the Centre. The decision of the Railways came to the fore through RTI application of a Congress activist, Mishra said.
He requested Pujari to allow a discussion on the matter after cancelling all other business in the House. As Pujari moved to other business, angry Congress members rushed to the well and attempted to climb the speaker’s podium resulting in adjournment of the House.
State BJP president KV Singhdeo told this paper that the issue should be discussed in the House. “The ruling BJD cannot get away by always blaming the Centre,” he said. His party colleague Rabi Naik said no decision has so far been taken in this regard by the Ministry. This is only a proposal of the Railway Board, he said.
Posted by Digambara Patra at 11:46 AM No comments: