BHUBANESWAR: Dana Majhi, the poor tribal who shot into fame for walking a 10 km stretch carrying the body of his wife, will no longer have to worry about the education of his daughters. City-based Kalinga Institute of Social Sciences (KISS) has come forward to admit his three daughters - Chandini, Sonei and Pramila - to the institution that provides free education and boarding to tribal children from across the State.
The KISS administration took the decision after many tribal organisations of the backward Kalahandi district, including Biswabasu Sabar Samaj, District Tribal Society, All Odisha Banjara Samaj, Tribal Employees Sangram Samiti, and local MLA Dibyasankar Mishra requested the authorities concerned to take educational responsibility of the girls.
Representatives from these tribal organisations along with Dana Majhi reached Bhubaneswar on Saturday and met Achyuta Samanta, Founder, KIIT & KISS, to press the demand. Samanta agreed to admit Chandini, Sonei and Pramila to the institute. The tribal representatives from the district also requested KISS authorities to open a branch of the institute in Kalahandi. A branch of KISS will start functioning in Kalahandi from the coming academic year, the authorities hinted. Though land for the purpose was purchased in 2011, work has not progressed due to paucity of funds. The tribal organisations’ members also requested to admit 100 more children from Dana’s Melghar village and nearby areas to KISS, which also agreed to it in principle. Samanta informed the tribal representatives about financial assistance from Government of Bahrain to Dana Majhi. He has already discussed with the Ambassador of Bahrain in New Delhi in this regard, he informed.
An amount of ` nine lakh will be given to Dana whenever he visits the Embassy of Bahrain in New Delhi with a representative of KISS, Samanta added. As per advice of the Ambassador of Bahrain, the amount will be deposited in the accounts of daughters of Dana as fixed deposits, he informed.
Posted by Digambara Patra at 12:47 AM No comments:

Happy that Kendriya Vidyalaya Dharamgarh started selling forms for 2016-17 academic year: Thanks to those who contributed in this journey

Thanks to Sri Anshuman Patra for this good reporting.
Dharitri, Sept 8, 2016 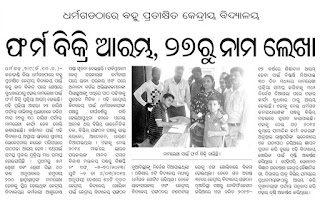 Posted by Digambara Patra at 11:55 AM No comments: 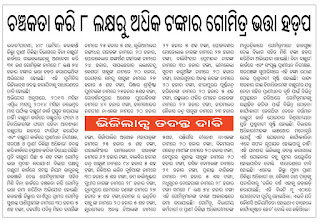 Posted by Digambara Patra at 11:50 AM No comments:

I have also been advocating to engage Vedanta group to establish Vedanta Kalahandi University in the region (a proposal earlier sent to both state Govt. and VAL in 2010) to bring higher education development in the region. Such an University will help in generating quality human resources in the local level and inspire local population towards higher education. Since higher education is directly related to improving living standard and quality of life of people, it will bring greater benefits in KBK region. In addition,  a national standard University by Vedanta group in Kalahandi might give a positive flux to silent critics and help in establishing world class Vedanta University at Puri.

Establishing educational institutions will have a win-win impact for both Vedanta group, state Govt. and local population in the region.

Once again my sincere thanks to you on behalf of people of Kalahandi and KBK region.  I hope state Govt. will facilitate more such proposal to bring positive change in the KBK region in quality education and health care facilities.

With best regards
Posted by Digambara Patra at 2:37 PM No comments: